EWDD partner Managed Career Services (MCS) held a ceremony Thursday June 20, 2019 to celebrate the culmination of the 2017 Wildfires National Dislocated Worker Grant (NDWG) and honor the workers who restored the landscapes scorched by the Creek Fire.

The $1.12 million NDWG, awarded by the California Employment Development Department (EDD) to EWDD and administered by MCS, provided paid work experience to 90 workers. Of the workers hired through the NDWG grant for the cleanup effort, 100 percent had significant barriers to employment and 75 percent had some form of previous involvement with the justice system.

Los Angeles City CD7 Councilwoman Monica Rodriguez provided opening remarks, followed by EWDD Interim General Manager John Reamer who delivered the key note address at the event, located at the historic McGroarty Arts Center. Gesturing toward the lush green hillside behind the center, John applauded the workers for transforming a landscape that in the aftermath of the Creek Fire was covered with debris, dried wood and dead trees into scenery that showed no signs of the fire at all. 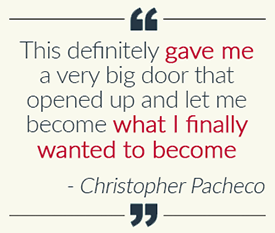 “Not only did we restore a hillside, but we are just taking joy in the fact that we could do a little small thing to help restore lives,” he said. “We can’t control what happened in the past. But we can move forward and you’ve done a phenomenal job at moving forward. Again, I salute you and praise you for the fine things you’ve done.”

During the 10-month restoration effort, participants worked a total of 27,974 hours and completely filled half a dozen “Roll-off Bins” with debris. Participants cleared three large canyons of debris, and nearly 25 miles of horse and foot trails were restored and cleared.

Several NDWG grant participants also shared their stories at the event. For participant Christopher Pacheco, who served as a supervisor during the Creek Fire clean-up efforts, the opportunity provided training and experience that paved a way for him to achieve his dream of becoming a wildlife firefighter. He joined CAL FIRE in April 2019.

“This definitely gave me a very big door that opened up and let me become what I finally wanted to become,” Christopher said.

Participant Raynell Ware, who served as a Crew Leader on the same team as Christopher, said the opportunity gave him a steady paycheck and work schedule that allowed him to pay his bills and take care of his young son.

“I’m going to continue doing this as long as the program is available to me,” Raynell said. “I like helping communities. I like helping parks ... so as long as you guys have work, I’ll be there.”

Explore the various services that EWDD offers by checking out the Business Services, Employment Services and Youth Services pages. Discover what EWDD can do for you!

This story is part of the EWDD UPDATES from the week of June 24, 2019. Read this issue and more.