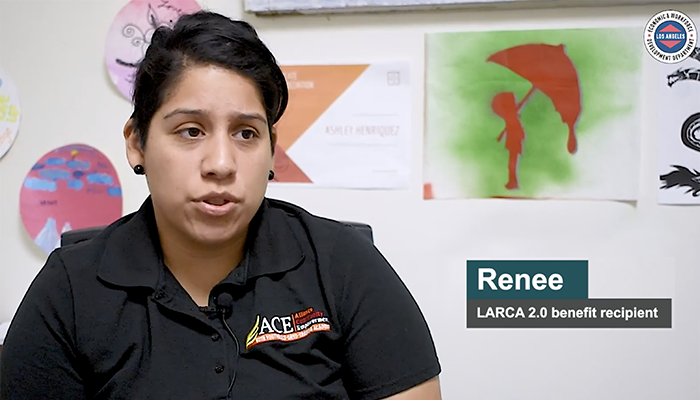 Through the program, settlement members are eligible for free benefits such as job training, tuition assistance and tattoo removal.

EWDD partnered with local radio stations KLJH, Power 106 and KDAY to promote the program’s benefits through Public Service Announcements and social media posts, including video testimonials from individuals who successfully received job training and tuition benefits to further their careers.

Each ad campaign aired in the weeks leading up to a large event in communities heavily impacted by the settlement.

At the Canoga Park event, EWDD shared a booth with Power106, the South Valley WorkSource Center and LARCA 2.0 partner ACE4Youth. ACE4Youth staff stated that the outreach effort paid off, with an estimated 40 people slated to return to ACE4Youth to learn more about the program and find out if they are eligible.

Several beneficiaries shared their success stories at the event, including Renee Robles, who received her cousin’s benefits and applied them toward earning a certificate in substance abuse counseling.

“The program is great,” she said. “I’m already going to finish school this month, so take advantage of the opportunity that is being offered.”

Settlement member Sam said his benefits covered the cost for him to earn his Class A driver’s license training that prepared him for his current role working for the City of LA Public Works Department.

“My advice would be to take full advantage of it because it’s all to benefit yourself,” he said.

This story is part of the EWDD UPDATES from the week of December 2, 2019. Read this issue and more.